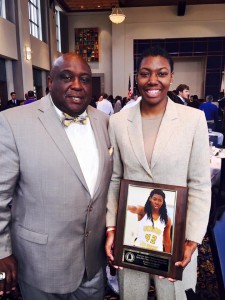 For two straight years, Kaitlyn has helped the Wenonah Lady Dragons bring home the 5A state basketball championship. In the spring, she was named state tournament 5A MVP. This fall, she was listed on ESPN’s list of top 100 high school female seniors. She is also the Alabama Sports Writers Association Class 5A Player of the Year. She’s made the All-Tournament Team the last three years in a row, starting her freshman year.
Wenonah Coach Emanuel Bell said Kaitlyn was highly recruited but she selected Ole Miss because “it was a good fit for her. She said it just felt good after her visit.”
Wenonah beat Hoover on Nov. 10, Bessemer on Nov. 12 and Center Point on Nov. 16. Bell said Kaitlyn, a 6’2 forward and center, was an integral part in those wins. “Because of Kaitlyn’s ability, we have been invited to a national tournament in Tampa, Fla. the day after Christmas,” Bell said. “It’s the Naples Holiday Festival.”
“This is big. It’s like the Nike Invitational,” Bell said. “The top teams from around the United States will be there.”
But before the Lady Dragons travel to Florida, they have two holiday tournaments to tackle in Birmingham. The first one will be the Birmingham district’s holiday tournament, scheduled for Nov. 19 – 21. Wenonah plays Huffman on Thursday, No at 6 p.m. For more information about the tournament, go here.
And on Nov. 24, 25 and 27, Wenonah High will host the Lady Dragons Invitational, starting at 4 p.m. It will feature teams from Birmingham, Auburn, Tuscaloosa and Homewood, Bell said.

No Events This Week

Events are added by athletic staff.
View All Events