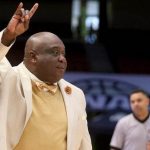 At least he got his steps in –  a little over 10,000. Roughly half accumulated during Emanuel Bell’s first full-go coaching appearance this season at Wenonah. His first since being diagnosed with lung cancer in August. Bell, 61, knows his oncologist will disapprove of his decision to roam and yell from the sidelines against Ramsay,

Justin Wiley scored 15 points to lead Class 5A No. 5 Ramsay over visiting Wenonah 60-50 in the first round of the Area 9 tournament. Jordan Millsap also added 12 points for the Rams (25-5), who jumped out to a 17-3 first quarter lead, which they never relinquished. Kameron Hardrick led Wenonah and all scorers

Class 7A No. 5 Hoover scored 24 points in the opening quarter of a 63-42 home victory against Wenonah. Dylan Smith led the Bucs (22-6) with 15 points, while Austin Cherry and Shaquille Bracey scored 10 each. Andrew Strickland pulled in 10 rebounds for Hoover. Kameron Hardrick scored 14 points for the Dragons (12-18).  Complete

Javien Williams scored 21 points as Class 6A No. 7 Woodlawn easily beat Wenonah, 71-48. The Colonels (20-6) took an early lead with a 21-12 run in the first quarter and added to the margin with a 22-12 burst in the third. Jaylon Dubose had 14 points for Woodlawn and DeCarlos Wright added 12. Kameron

BIRMINGHAM, Alabama — Sparkman senior Thomas Melbert summed up his big game Monday afternoon at the Kings of the Court at Bill Harris Arena the only way he could. His modesty showed, but so did the reality of the matter. “Scoring 31 points is a good game,” he said. “When you score that many, you

Corey Davis scored 14 points to go with seven rebounds to lead Class 3A No. 2 Midfield to a 74-47 win against visiting Wenonah. Joseph Murry added 13 points, 10 rebounds and six assists for the Patriots (13-10), who outscored the visitors 38-22 in the second half. Ahmad Isaac contributed 10 points and seven rebounds

Kameron Hardrick hit a 3-pointer with 48 seconds left in the game as visiting Wenonah held on to defeat Fairfield 51-50 in a Class 5A, Area 9 game. Hardrick’s basket game the Dragons (10-10, 2-3) a 51-48 lead. He finished with 10 points. Wenonah’s Quinton Gates led all scorers with 22 points. LaByron Harris led

No Events This Week

Events are added by athletic staff.
View All Events